KCT5 News reported that a Georgia man, John Paul Jones, Jr, didn’t accidently plow his truck into his house because his foot slipped off the gas pedal. He did it on purpose.

“I don’t know, it was just one of those spur of the moment crazy things,” said Jones.

Jones is a construction worker by trade and has been repairing his damaged home the last few days.

“I’ve been out of work for the past year and a half. Needed some work,” said Jones. “It (fixing his own house) didn’t pay anything, but hey, it kept me busy.” 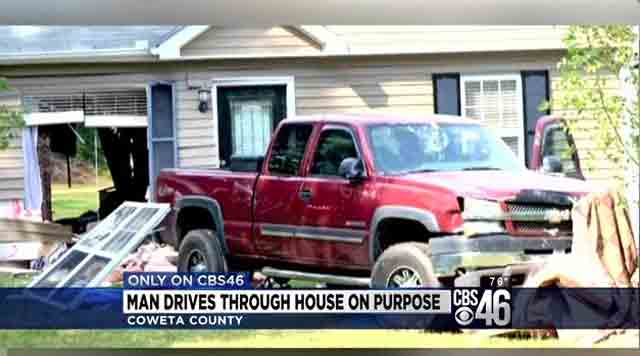 Jones said he plans to use before and after photos of his repaired house to show potential clients how good his construction skills are.

“I’m turning this whole thing from a negative into a positive,” said Jones. “This remodel will make a nice portfolio piece, you know. Here is a house totally damaged and now look at how pretty I fixed it up. I think this whole incident will lead to me getting a lot of construction jobs.”

Jones will not be charged with a crime because it is perfectly legal to drive a truck through a house so long as both the truck and house belong to the owner.

Women wanted for stealing Walmart scooters, riding them down U.S. 30