I was going to add paragraph breaks and punctuation, but instead decided to give you this Facebook status update written exactly how the author intended. 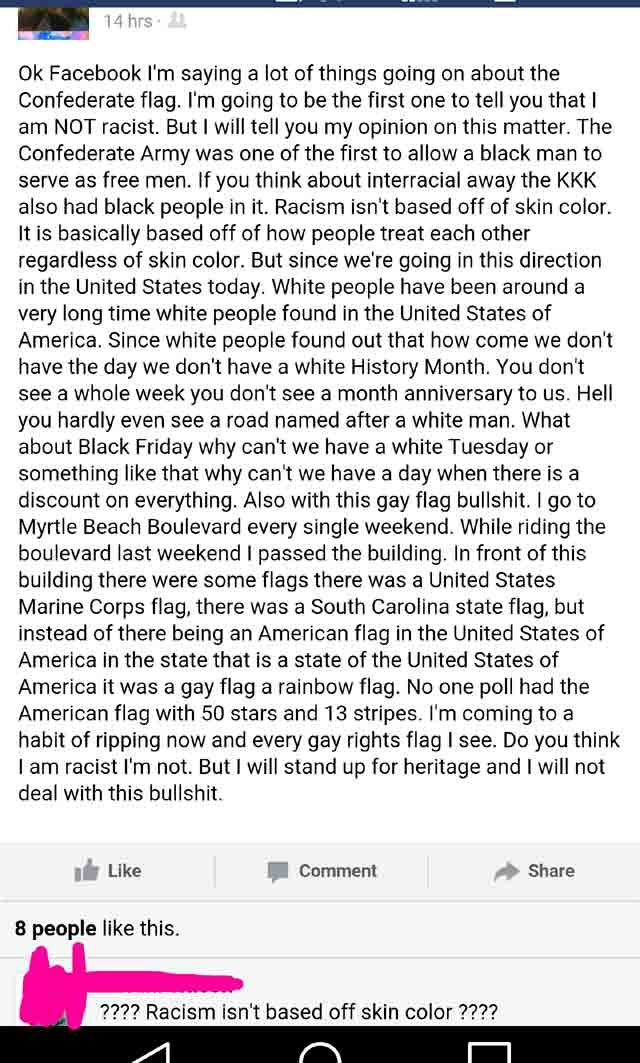 Ok Facebook I’m saying a lot of things going on about the Confederate flag. I’m going to be the first one to tell you that I am NOT racist. But I will tell you my opinion on this matter. The Confederate Amry was one of the first to allow a black man to serve as free men. If you think about interracial away the KK also had black people in it. Racism isn’t based off of skin color. It is basically based off of how people treat each other regardless of skin color. But since wer’e going in this direction in the United States today. White people have been around a very long time white people found in the United States of America. Since white people have found out that how come we don’t have the day we don’ve have a white History Month. You don’t see a whole week you don’t see a month anniversary to us. Hell you hardly even see a road named after a white man. What about Black Friday why can’t we have a white Tuesday or something like that why can’t we have a day when there is a discount on everything. Also with this gay flag bullshit. I go to Myrtle Beach Boulevard every single weekend. While riding the boulevard last weekend I passed the building. In front of this building there were some flags there was a United States Marine Corps flag, there was a South carolina state flag, but instead of there being an American flag in the United States of America in the state that is a state of the United States of America it was a gay flag a rainbow flag. No one pole had the American flag with 50 stars and 13 stripes. I’m coming to a habit of ripping now and every gay rights flag I see. Do you think I am racist I’m not. But I will stand up for heritage and I will not deal with this bullshit.