A North Carolina woman said she has now found true happiness after fulfilling a lifelong dream of becoming blind. 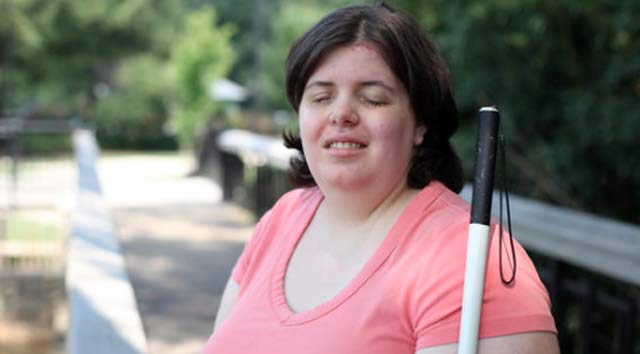 Jewel Shuping, 30, apparently has something called Body Integrity Identity Disorder which causes able-bodied people to believe they are meant to be disabled. Same sort of thing as gender identity disorder, I guess.

When Jewel was a teenager she started wearing dark sunglasses and walking with a cane.

“I just really wanted to be blind, so I’d walk around with my eyes closed using the cane to guide me,” Shuping said.

By the time Shuping was 21 she said there was a nonstop alarm going off in her head saying that she needed to become blind.

Shuping’s desire became unbearable so she decided to blind herself by putting drops of drain cleaner and a numbing agent into her eyes.

“It hurt, let me tell you,” Shuping said. “My eyes were screaming and I had some drain cleaner going down my cheek burning my skin. But all I could think was ‘I’m going blind. It’s going to be okay.'”

It took about a half year for the damage to take full effect. She had to have one eye removed.

“I really feel this is the way I was supposed to be born, that I should have been blind from birth,” she said. “When there’s nobody around who feels the same way, you start to think that you’re crazy. But I don’t think I’m crazy, I just have a disorder.”

Okay, lady… maybe they have other ways of dealing with your “disorder” (medication? Cognitive behavioral therapy?) instead of actually BLINDING YOURSELF!!!

Woman Thanks Bear For Not Eating Kayak, Bear Then Eats Kayak