North Dakota hunters killed over 12,000 ducks last week near Minot as part of what they called “a mercy killing.” 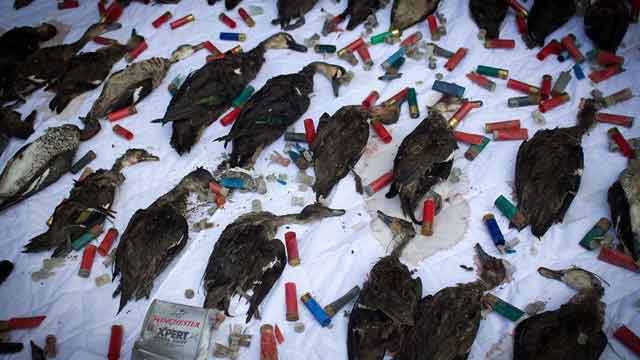 “Due to unusually cold weather the ducks were having trouble finding food,” United States Fish & Wildlife spokesman Newt Gastin said. “These hunters took it upon themselves to end the ducks’ suffering by killing them in a mass slaughter.”

Three hundred hunters gathered around a large field and ambushed the huddle of sickly ducks killing nearly every bird with thousands of shotgun blasts.

“I walked out from my house and saw the slaughter,” a farmer who lives close by said. “The scene was something out of a war movie… but with ducks. These hunters were filling pickup trucks with the dead and dying. Why not just feed them instead of murder them?”

Ben Johnson, one of the hunters charged with poaching, addressed criticism: “Feeding the ducks would have costed too much. Killing them was merciful, humane, the right thing to do. I will take my criminal case all the way to the supreme court if I have to. This wasn’t poaching. I’m a good man.”

The United States Fish & Wildlife service found the hunters and their families having a mass duck roast in a Minot park after the slaughter. They confiscated ducks that had yet to be cleaned, arrested the hunters, but let the families continue their feast.