Inside, it’s a charming cafe done in yellow and pink with off-kilter menu selections like peanut butter banana chocolate waffles, little princess pink lemonade cupcakes and cucumber raisin cinnamon ice cream. However, on the outside, the charm gives way to controversy. 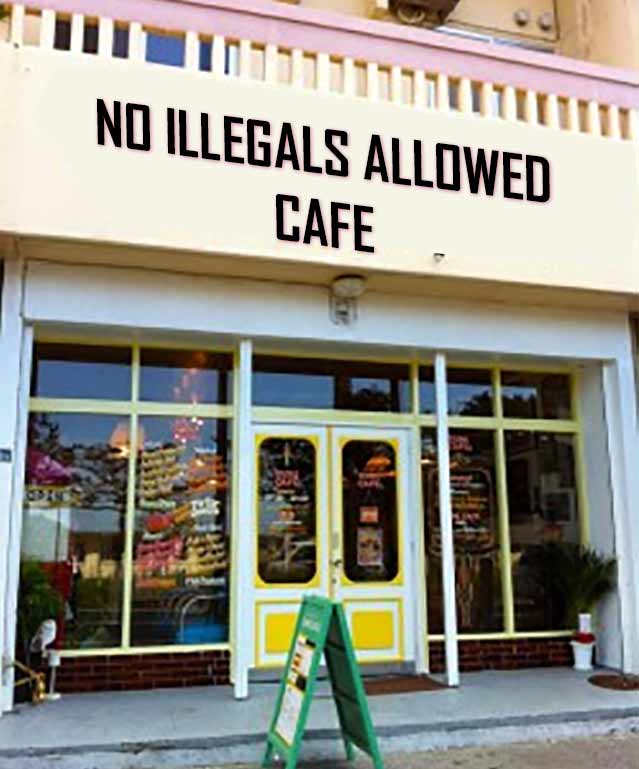 The name of the eatery? No Illegals Allowed Café.

Fed up with illegal aliens “destroying Los Angeles and the United States,” Roy and Nancy Bismark decided they could do something.

“First, illegals take American jobs and drain money from our social services,” Roy Bismark said. “Second, illegal Mexicans carry exotic diseases that white people are not immune to. I know a dozen people that are dying of mysterious diseases brought over by illegal Mexicans. After watching many friends get so sick from these diseases, I had the light bulb moment to change our name and send illegal Mexicans a strong message: you are not welcome in our cafe.”

Roy says it’s against the law the to discriminate based on race or color, so if illegal immigrants do come in he is required to serve them.

“I can’t discriminate based on color, but I can refuse service based on dress and appearance: I do not allow ponchos, sombreros, bare feet or dirty clothes. That takes care of about thirty percent of them.”

“Anybody that has brown skin who doesn’t meet his dress code can be kicked out. What if a white person wears a poncho inside? I bet Roy Bismark won’t stop that,” a critic of the cafe said.

“Our business has actually picked up,” Nancy Bismark said. “A lot of people appreciate that we’re sending the brown people a message. You’re not welcome in our cafe and maybe you should take that as a sign to go back and stink up your own countries.”